There are so many wonderful museums in the Pittsburgh area, so I relish at the chance of being able to visit any of them.  For being a smaller city (population ca. 300,000) Pittsburgh boasts the cultural (and athletic) abundance of a first tier city.  A lot of that has to do with our past and the money that was made in the iron, coke, coal, steel and glass industries. Many prominent, wealthy families (read: barons) built homes in the area and became dutiful philanthropists.  Mr. Steel Baron himself, Andrew Carnegie (1835-1919), started our free public library system that still bears his name today. The baron this particular museum was named after, and whose former property it rests on, is Henry Clay Frick (1849-1919).  Frick made his millions in coke and steel manufacturing,but was also a serious art patron.  His larger collection is in New York City, but we have his daughter, Helen Clay Frick (also an art patron) to thank for the lovely ensemble in Pittsburgh.  It would seem that our famous sobriquet, The Steel City, did not, in fact, describe the whole story of Pittsburgh.

The Frick Art and Historical Center is located across the Monongahela River from me and in the East End of Pittsburgh.  It is on the border of the very beautiful and culturally diverse Squirrel Hill and Regent Square.  Across the street is the lush Frick Park, which is Pittsburgh’s largest municipal park, at 644 acres.

Ages ago, when I was figuring out what I wanted to do after college, I had an office job on the Regent Square side of Frick Park.  I would walk over almost daily and eat my lunch, read and daydream.  The oaks and maples that towered over the benches were so full I would stay dry in a steady drizzle. It was delightful to read in the rain, thanks to the shelter of an old tree, and that memory still makes me smile today.

Flash forward to this May, and I was to meet my Aunt (she’s not my aunt by blood, but she’s been a close family friend since I could walk, so she’s earned the title) for an exhibit, Fast Cars and Femme Fatales: The Photographs of Jacques Henri Lartigue.

Before I went in I explored Frick Park across the street – it was a perfect, sunny, Friday in spring. I had that kind of Friday feeling – done with work, beautiful park and trees all around me, world class art museum across the street, knowing tomorrow is Saturday – perfect.  I snapped some photos of trees with the soft evening sun and took a walk around the Frick complex.  The museum and Frick house is literally in the middle of a neighborhood of beautifully kept houses and landscapes. I tried to keep my mouth closed as I took in the largesse of some of these properties. Some looked like they belonged to the Frick era, some were newer. The trees, however, were all old.

I have a curiosity about all art in general, and have a couple of areas that I just adore, but photography has never been one of them.  But, after this exhibit, I learned Lartigue was a French aristocrat who loved to photograph his family and other wealthy people pursuing leisurely pastimes, such as boating, skiing, flying planes, driving and swimming.  All this just as the photograph and camera were irrevocably making their way into all our lives.  His pre-1914 black and white photos were my favorite – they show the sunset of the gilded age and the old aristocratic families, fashion and society.  The world was forever changed after WWI; a generation of men were lost, populations were displaced and empires crumbled. See some examples of his work here.

His diary entry on August 1, 1914, shows a sketch of soldiers departing on a train, with the understated scribble – general mobilization is declared. 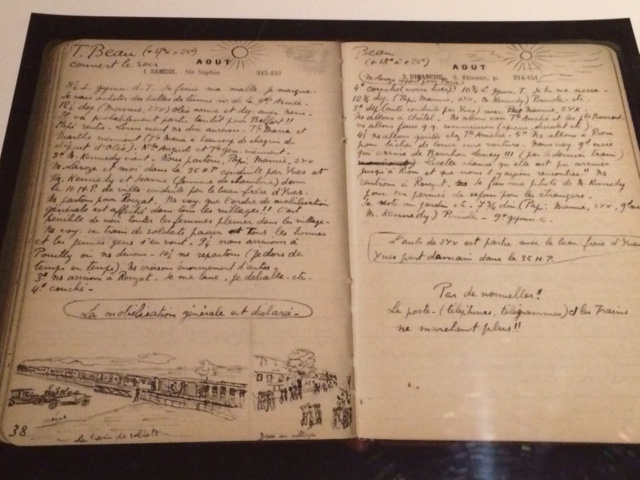 The Frick also has permanent exhibits as well, from various historical periods including medieval, Baroque, Classical and Nouveau.

I just adored this 18th century salon, right down to the dim candle-like lighting. You can almost see the pouf hairstyles and silken waistcoats. Je peux rêver, non?