I recently returned to my little part of Pennsylvania from a 2 week excursion abroad.  I visited Ireland again, and each time I return to that beautiful country, I vow to come back.  My previous visit was all the way back in 2003, as a young, bright-eyed college student, who visited Dublin and Co. Meath for the first time.  That particular time I even had the pleasure to stay with a friend’s family, which was my first introduction to the world-renowned “hospitality without bounds” of the Irish people.  The time before that, and my first to the country, was as high school student in 1997, when my parents decided it was about time to have a “European tour,” just like the aristocrats of old.  Ok, not quite as extensive as an 18th century “lady of quality” would have, but I did get to visit Spain too!

Anyway, I digress.  This time around, we visited the West: Galway, Doolin and Dingle.  This first post is about Galway and the part of town where we stayed, Salt Hill. It had been 20 years since I last saw the rugged, green and grey beauty of the west coast of Ireland, and it did not disappoint me.  The city of Galway was as I remembered it as well; beautiful, ancient and cultured.

View from Barna, just up the road from Galway

Lovely eagle head statue. I feel like I should write a story about this one… 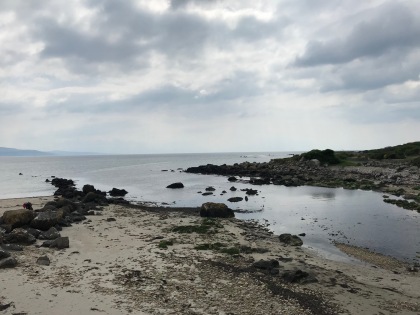 Just the rugged beauty of the West. 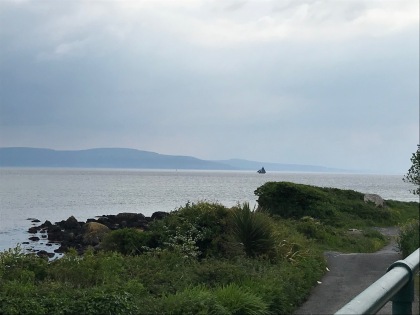 The ship in the distance is the famous Galway Hooker, a fishing boat.

You could just find yourself daydreaming as you gaze out into Galway Bay.  When we did take some time to explore the city, we stopped and saw the Spanish Arch (named for the Spanish galleons that used to frequent the port) and an interesting ruin that was discovered by mistake.  The Hall of the Red Earl was found by excavators by accident, and as it turns out, was the skeleton of a late medieval/early modern customs house.  It was also a place where justice was handed out for crimes, which sounds strange to modern ears.  Sort of a two for one deal?  I didn’t get pictures of all the placards explaining it, but it was really interesting.  The city historians were even able to locate detailed plans of old Galway that showed this is exactly where this hall was.

Hall of the Red Earl

View from the banks.

Galway was such an interesting city and I would like to return and explore even more.  There were medieval history tours, walking tours and haunted Galway tours; and I am interested in all of those!  There just never seems to be enough time.  Ah well, like I said, I intend on coming back again.